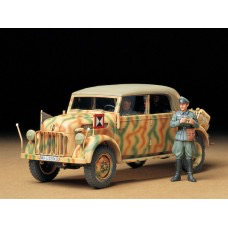 Tamiya German Steyr Type 1500A Kommandeurwagen 1/35 Scale During WWII, many different variants of the Steyr Type 1500A/01 Kommandeurwagen were produced. Among them was a large 4-door version which featured a rear trunk and leather seats and was often used by high ranking officials and military commanders for official business. This Steyr now comes reproduced as a plastic assembly model kit. The distinctive curves of the rounded hood and trunk areas have been precisely reproduced. You can choose to assemble the roof, trunk's hood, and all four doors in either open or closed positions. The leather seats have a realistic finish. Three figures to depict a standing officer holding binoculars, as well as a seated driver and general officer figures are included in the kit. Length 145mm