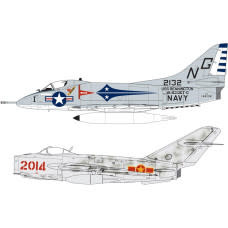 Armed with cannons, bombs and unguided missiles, the little A4 Skyhawks would skim across the rice paddies and hug the densely forested mountains of Vietnam in the early days of the Vietnam war of the 1960s. Against them ranged small arms fire, artillery, guided surface to air missiles and MiG’s of the North Vietnamese Air Force. Alongside the supersonic MiG-21 was the older subsonic MiG-17F. This aircraft, codenamed Fresco, was a very maneuverable opponent, and certainly a match for the Skyhawk. Between them, they formed the backbone of the air war over Vietnam.