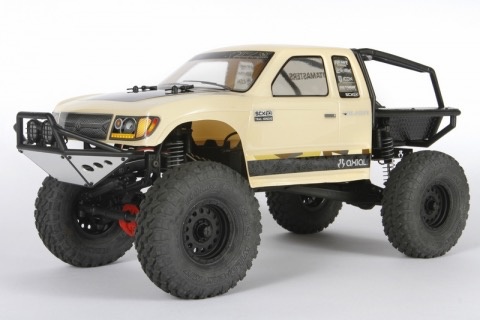 Axial SCX10 II Trail Honcho RTR 4WD 1/10 The SCX10™ II Trail Honcho™ is the reliable choice for scale trail fun! For the past nine years the SCX10™ has been the staple vehicle platform for scale trail enthusiasts around the world. When it’s you, the trail and your rig, you want the tried, and true. You want real world community tested, hobby shop supported, aftermarket supported with close to ten years of history and scale trail adventures. The Trail Honcho™, built on the SCX10™ II chassis, meets the demands and the rigors of scale trailing miles from home when you need reliability the most! When it’s time for adventure, you want a rig that allows you to think the unthinkable and go out and accomplish it. The SCX10™ II Trail Honcho™ is all about exploring the full size world in scale, making it a true adventure machine. Equipped for heavy duty trailing – AX10™ transmission, single-piece AR44 axles, Method Hole wheels, Falken Wildpeak M/T tires and a set of four LED lights – the Trail Honcho™ takes the lead and puts your stamina to the test. The Redonda Ridge Trail, within the mountains of Big Bear California, is mostly used by off road motorcyclist, and revered as the Malcolm Smith Trail due to it’s technical tenacity. The trail was recently re-visited by one of Axial’s own; part of a crew who had traversed the 9.68 mile OHV trail a few times in the past on motorcycles. The thought came about that it would make for a great SCX10™ proving ground, thus the idea was conceptualized to hike the trail, and put the latest version of the Trail Honcho™ through its paces, to uphold the “Trail Honcho” name by putting it on a “black diamond” trail for full size vehicles. Axial takes toys seriously, plays seriously, and made plans to go the extra mile to showcase the Axial SCX10™ Trail Honcho™ in it’s true, namesake terrain.