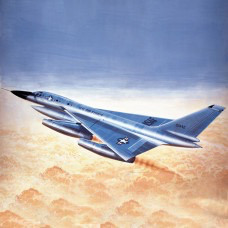 ITALERI B-58 'HUSTLER' 1:72 Scale. SUPER DECALS SHEET FOR 6 VERSIONS This 4-engined delta wing bomber came into service with the US Strategic Air Force at the beginning of the 60s and was, at that time, the pinnacle of technology. The B-58 could reach supersonic speeds even at full load and was specifically designed to carry nuclear weapons so as to provide a fast response to a Soviet attack, which, back in the Cold War of the 50s, was considered a constant threat. Type: Bombers and reconnaissance aircrafts Period: from ‘50 Country: United States Skill: 4 Model Dim.: 40,9 cm Box Dim.: 373 x 241 x 60 mm