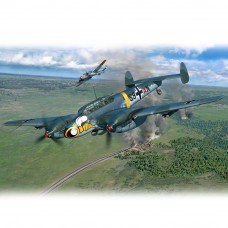 Revell Messerschmitt BF110 C-7. 1:35 scale. The Messerschmitt Bf110 was one of the standard aircraft of the Luftwaffe in the Second World War and officially classified as a “destroyer”. The C-7 version was the fighter-bomber version of the twin-engine combat aircraft and was equipped with two 500 kg bombs. Age: 13+ Number of parts: 423 Length: 378 mm Height: 93 mm Wingspan: 506 mm