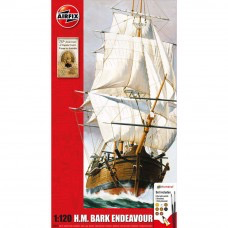 Airfix (k) Endeavour Bark And Captain Cook 250th Anniversary - 1:120 Scale.( includes paint,brush & glue) In 1768 Captain James Cook set off on a voyage to the Pacific Ocean. The expedition’s main purpose was to study and observe the 1769 transit of Venus across the sun (in conjunction with several other observations made from different locations). However, a more pragmatic reason was to be relayed to her captain by the Admiralty in additional instructions; namely to search out the southern Pacific for signs of the yet to be discovered continent we now know to be Australasia. Scale 1:120 Skill 4 Number of Parts 106 Dimensions (mm) L395 x W74 Age Suitability 8+