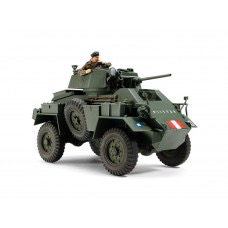 TAMIYA 1/48 Scale - British 7 Ton AC MK.IV. Marked for Success Mobile yet defensively capable armored cars were a necessity for forces in WWII, and the 7ton armored car filled that need amply for the British: featuring effective sloped armor, a fully-rotating turret and 4WD setup, it managed a top speed of 72km/h from its 90hp 6-cylinder engine. The Mk.IV was the final of its four variants and possessed the largest gun, with an upgrade from the previous 15mm machine gun to a 37mm weapon. It was also the most prolifically produced, and around 2,000 Mk.IVs rolled off the production line and into units across North-West Europe and Italy in the latter stages of WWII. The Mk.IV was called upon as a reconnaissance vehicle and even a command car. The distinctive Mk.IV armored car form is captured in compact yet excellently-detailed 1/48 scale. 37mm gun-equipped turret shows off great attention to detail, accented by realistic commander figure. Authentic underside features depiction of suspension, without needing a mountain of individual parts. This is a 1/48 scale plastic model assembly kit of the British Mk.IV 7ton armored car. Length 95mm, width 48mm. Extensive study of the real thing ensures that this model captures the sloped form of the Mk.IV with great accuracy. An intuitive parts breakdown makes for hassle-free assembly. Features a realistic depiction of the vehicle underside. Choose to assemble with turret crew hatch open or closed. Comes with a commander torso figure. Markings included to recreate a Polish 1st Armoured Division vehicle.