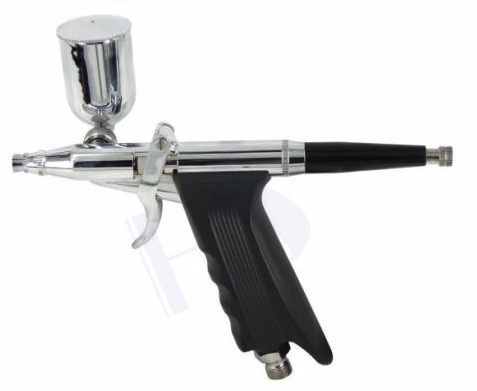 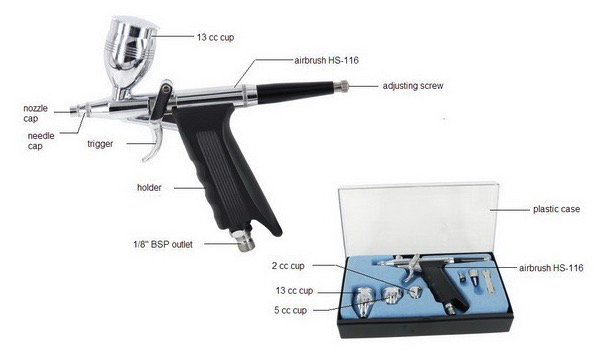 HS Dual Action Pistol Grip Airbrush. Specifications: Dual-action Airbrush Feed Type: Gravity Nozzle: Dia. 0.3, 0.5MM Acity: 7CC, 10CC Pressure: 15-50PSI Single-action trigger air-paint control. Airbrush makeup Though the earliest record of this type of cosmetic application dates back to the 1925 film version of Ben-Hur, now it become more and more popular for home use, professional makeup, Facial Care and so on. Airbrush tattoo Airbrushes can also be used to apply temporary airbrush tattoos. An artist sprays ink onto the skin through a stencil. Often, the resulting design mirrors the look of a permanent tattoo, without any pain or discomfort. Airbrush tanning Airbrushes are used to apply special tanning solutions as a form of sunless tanning that simulates the appearance of a natural sun tan. It is promoted as a safer and healthier alternative to the damaging effects of long term exposure to the sun. It is often performed by companies also offering other sun tanning alternatives like sun beds. Finger nail art Airbrushes are also used to apply images onto human finger nails as well as synthetic ones that are later glued to the person's actual finger nail. Clothing T-shirt airbrushing is popular- Many T-shirt airbrush shops offer to paint any textile that will hold paint, including jeans, denim jackets, leather apparel, pillow cases, and hoodies. One well known producer of airbrushed clothing is Marc Ecko, who used to airbrush T-shirts when he started his clothing company. Hobby Airbrushes are commonly used by scale modeling enthusiasts because finer coats can be laid down, as well as opaque effects, like weathering, adding stains etc. Automotive Airbrushes are used to spray murals, graphics, and other artwork on automobiles, motorcycles and helmets. This art form has been around since at least the fifties, but more recently it has seen an increase in popularity thanks to such shows as Rides and American Chopper. Most professionals prefer to use automotive grade bases through top of the line gravity fed airbrushes. The cost to hire a professional artist will vary from a few hundred to several thousand dollars, depending on location, skill level and reputation.