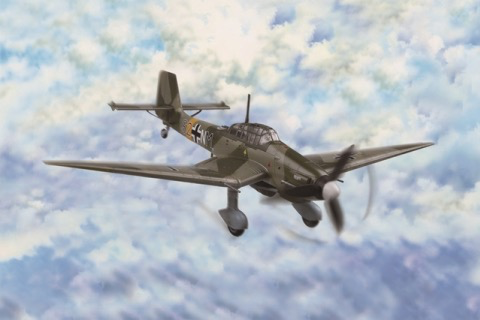 HOBBYBOSS (f) 1:72 Scale - Junkers JU-87D-3. The Ju 87 Stuka dive bomber might be one of the most famous bomber during the WWII.It has been the main force in the ground support of the Air Force since the start of the Blitzkrieg. The Ju 87D is the most important series of the Stuka family,and the type Ju 87D-3 can be regard as the firmest of them.The reinforced armor can protect the aircraft form the hail of bullets of the AA guns.About 1559 type D-3s were produced during the WWII. Item No 80286 Item Name Junkers Ju 87D-3 Stuka Bar Code 6939319202864 Scale 1:72 Item Type Static kit Model Dimension Length: 160mm Wingspan:210 mm Total Plastic Parts 40+ Total Sprues 4 sprue, wing and fuselage Chromeplate Parts n/a Resin Parts n/a Metal Parts n/a Photo Etched Parts n/a Film Accessory n/a Released Date 2013-01 More Features The kit consists of over 40 parts, includes 1 clear windscreen/canopy