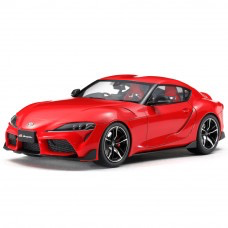 TAMIYA Toyota GR Supra 1:24 Scale. The latest addition to the long-running 1/24 Sports Car Series is a stunner – Toyota’s brand new GR Supra, which joins its R/C cousin (Item T58674) in the Tamiya catalogue. Upon its global announcement in January 2019, the TOYOTA GR Supra created a worldwide buzz. Designed with beautiful balance, it provides superlative handling and stable corners, while the sensuous long nose, short deck form has a striking double-bubble roof. Combined with impeccable power from a turbocharged inline-six or inline-four engine, the GR Supra is set to define the next generation of performance. About the Model This is a 1/24 scale plastic model assembly kit. Length: 183mm, width: 85mm, height: 54mm. The dynamic lines of the body are rendered with stunning accuracy. Bumper, A pillar, front grille and other parts are moulded separately for a sharp finish. Features a realistic interior depiction, with separate white parts for red sections, plus multi-part center console and dashboard, and seats with separate headrest components. Can be assembled as Japan, U.S. or Europe spec, with dedicated left- and right-hand drive part positions. A detailed underside shows off the exhaust system, plus multi-part front and rear suspension. Features the 19-inch wheels exclusive to the top grade RZ car in Japan. They are two-part designs with separate metal-plated and black components. Tyres have realistic tread. Includes metal transfers, plus masking stickers for window areas.