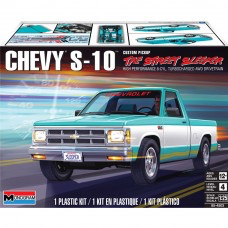 REVELL '90 Chevy S-10 - 1:25 Scale. The Chevy® S-10™ was first introduced in 1982. It was the first small size pickup truck to be designed and built domestically by the big 3 auto companies. There had been other small pickups, but those were rebadged imports. This model is the first generation of the truck, which lasted until to 1993. The S-10 is now into its third generation. When building the S-10, GM used many off the shelf parts from other vehicles. Mostly these parts came from GM’s G-body line of intermediate cars. At the same time a GMC® version was offered and was named the S-15 Sonoma™. Many different engines and transmissions were offered in both lines including a diesel engine. • Turbocharged 4.3 liter 285 hp V-6 engine. • Detailed all-wheel-drive drivertrain. • Opening hood and tailgate. • Optional 3-panel rear window. • Moulded in white and clear with chrome plated parts and soft black tyres. Skill Level: 4 Scale: 1/25 Length: 7.375” Width: 3.00” Height: 2.375” Parts: 120